There is a new Standard for Cut Resistance Gloves.

Next
There is a new Standard for Cut Resistance Gloves.

There is a new Standard for Cut Resistance Gloves.

Why is this important?

There is a new standard of cut resistance in gloves. This standard was created as the cut resistance test has started to become unreliable when it comes to cut 5. The true cut resistance of a cut 5 glove could be different to another set and different to another set again. Since they were all rated at cut 5 because of the current test, people think they are all equal. This is not the case and the introduction of a new test proves this. When the current ‘Coup’ test is deemed unreliable they move onto the new ISO test for a more accurate result.
The current standard for gloves in Australia is AS/NZS 2161:2005. It is also identical to the European standards which are comprised of:

What’s Changed and Why:

The new EN388:2016 standard provides changes to the ‘Cut Resistance’ testing and performance result markings. The new standard incorporates the existing cut (coup test) and the ISO13997 test methods.
The current ‘Coup’ test method is unreliable for cut resistant materials such as fibreglass or steel which have a dulling effect on the blades. As a result, the ISO test method has been added to the standard. The ‘coup blade cut test’ has been the standard test method for cut protection. A rotating circular blade moves horizontally to-and-fro across a fabric sample with a fixed force of 5 newtons (N) or approx. 500grams applied from above. The test ends when the blade breaks through the sample material and the result is specified as an index value. The result is determined by the cycle count needed to cut through the sample and additionally by calculating the degree of wear and tear on the blade.

Changes to the Coup Test

Gloves re-tested under the new test procedure may not attain the same rating due to sharper blade equipment.

The EN388 standard came to be before highly engineered yarns such as glass and steel became prevalent in protective gloves.

Materials containing a high resistance to cutting can often lead to a rapid blunting of the test blade, resulting in misleading test results and a large performance variance gloves considered highly cut resistance (cut level 4 to 5). To improve the accuracy and reliability of cut test data, CE certification bodies recommend that when gloves providing high cut resistance (EN388 level 4 and 5) are required, the ISO 13997:1999 test should be considered. The test is performed on a TDM machine and the cut index is calculated based on the force necessary to cut the fabric sample.

To differentiate between the two cut scores that will be generated under the new EN388 2016 standard, the cut score achieved using the ISO 13997 test method will have a letter added to the end of the first four digits. The letter assigned will depend on the result of the test, which will be given in Newtons. 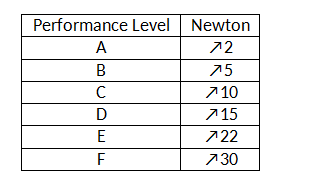 The table to the right outlines the scale used to calculate the results from the ISO 13997 test method. These gloves are designed to reduce the force of the impact on the hand. The performance rating is shown in the table to the right – Pass/ Fail/Not Tested.

The specification if the abrasive paper used in the abrasion resistance test has changed. This is to ensure more consistent results. This revision along with a number of minor changes to test materials means that it is possible some abrasions scores may change when a product is re-certified under the new test conditions. The abradant (sand paper) specification is Grit 180 with an aluminum oxide grain amongst other specific requirements.

With the addition if the ISO test cut resistance 5 gloves can have higher cut resistance rating and this will give clarity to the range of gloves showing their true cut resistance. This may push some gloves to be better than others and some may stay the same. Just be aware of the new test and how to identify them when looking for gloves. Also as this new standard and testing are new not all gloves will have the new labeling so keep that in mind as well. Can gloves that comply with the old EN 388 standard continue to be sold?

When will the Australian standard reflect the new EN388:2016 standard?